Two unemployed laborers, imitating film images and language, attempt to rob the elderly owner of a tobacco shop and her granddaughter.  In farcical fashion the tables are turned, and the bungling robbers find themselves trapped by the police.  They at first hold the two women hostage, but the four quickly make peace and even band together.  At the play's end, however, farce turns to tragedy.  When the robbers decide to surrender, the police gun down the younger of the two men.

First staged in 1981 in a fringe theatre in Vallecas, a working-class neighborhood in the outskirts of Madrid, La estanquera de Vallecas was revived at Madrid's Martín Theatre in 1985 and made into a movie in 1986.  Marked by surface humor, a lively use of colloquial language, and the introduction of characters marginal to the mainstream of society, the play blends realistic comedy with touches of the grotesque.  Performed in staged readings at Bridge Theater, Miami, 1996 and 1997, Dir. Steve Wise.  (Alternate title:  Hostages in Hialeah.) 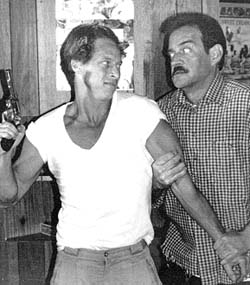